Turkeli aims to employ one thousand people and make export of 10 million Euros in 2010!

The company planning to be the first in the world, by passing Mexico with new investments, sends 2 articulated lorries of products to EU countries each and every day 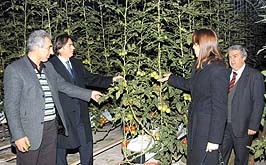 Mr. Hasan Shenturk, Chairman of Board of the Turkeli Seracilik, who admired the greenhouses he saw in Amsterdam established the biggest greenhouse of Europea in Dikili. Turkeli today has the feature of being the first greenhouse which makes production with geothermal energy in Turkey.

Mr. Osman Gençer, Chairman of Board of the Yeni Asir Newspaper’s Broadcasting Group who visited Mr. Hasan Shenturk, Chairman of Board of the Bayburt Group who started the modern greenhouse business with Turkeli Seracilik received information about greenhouse business with Mr. Tevfik Tortamish, Director of the Regional News and Ms. Demet Koshay , Public Relations Manager.

Mr. Shenturk explained to the team of the Yeni Asir Newspaper how he started such a big investment: "When I was working in the construction sector, I saw the greenhouses in Amsterdam from the airplanes I was flying with to the Netherlands in 2001." If people of a country like the Netherlands are establishing greenhouses and earning money despite all the negativities why should not this be done in our country, which is more convenient for greenhouses with its sun air and water? “I decided to do the greenhouse business because I saw that the sea was filled due to lack of soil and the sunshine was created with the light bulbs during my visit to the Netherlands .The environment they are trying to create already exists in our country. But there is no investment. What I saw on this trip triggered me and decided to make an exemplary investment. I traveled all the Aegean Coast and I saw the geothermal potential in Dikili so I decided to make greenhouse business here. "Mr. Shenturk stating that they are the first company engaged in greenhouses with geothermal energy in Turkey with this business said that Turkeli is Europe's largest and the world's 5th largest greenhouse in terms of area and they will pass Mexico with new investments and become the world's largest greenhouse.

Mr. Shenturk continued his words saying:"We established our business on an area of 60 decares in 2003. We have reached 250 decares currently and we are aiming to reach 350 decares in 2008. We started to make export amounting to 7-8 million Euros a year with the tomato and pepper varieties produced by 350 employees working in the greenhouse. We started to overcome the dominance of the Netherlands in the European market and we have invested 15m euros in greenhouse and packaging facilities until today."